Barry was a part of the five fearless travelers in Haiti this past week; here he gives us a touching recap of his journey:

For the last couple months as I prepared for my trip to Haiti my focus was on what I could do for the people in the area we were going to work in. It was all about me doing for them and giving to them. I now realize how totally off the mark I was. You see, it was me who received so much more from the trip. I cannot believe how arrogant I was in my assumptions. In the next couple of paragraphs, I will try to explain the best I can what I mean. For some, it may not be clear simply because you must experience Haiti to understand Haiti.

Our team consisted of Alex and Alisane, who were there to film and produce videos for the Foundation, and Tara, who was the team leader and also took a very active role in directing the videos and scheduling the filming. The fourth member of the team was Jessica. She is the IT person, and her role was to install the wireless router in the dorm, school, and clinic. And then there was me. My job was to assist Jessica with installing the Internet equipment, and then (when not needed there) to help the video team.

We flew into Port-au-Prince on Sunday the 9th, then were driven four and a half hours to Bainet, where we spent the night. Jessica and Tara had made this trip before. The rest of us were rookies. We were met in Bainet by John who is a med student at UNC and is on a 3-week tour there working at the clinic in Zorangé. The six of us would spend the week together working, interviewing, and sharing. We would be experiencing Haiti together.

Monday morning we headed up to Zorangé. We would stay there until Friday. On the way there, Elade (founder of Hope for Haiti Foundation) was driving us in the 4Runner that belongs to the Foundation. We were following the dump truck that was carrying our luggage and Vierge who is the cook and tour guide for the group. We drove eleven miles mostly up the Zorangé river bed. At one point, we stopped and a woman with a basket on her head approached the truck and engaged in a conversation with Vierge and then handed her the basket and took something. I asked Elade what was going on. He said we just bought fish for dinner — this is a Haitian drive-thru. Elade is not only the founder of the Foundation, but runs a lot of the day-to-day activities. He has a very kind and warm spirit. He makes everyone comfortable, welcome, and appreciated. He does not allow the local kids to ask for handouts. He does not want to foster a generation of asking for handouts. More about that later.

Working with Jessica was such a blessing. She comes from a long line of servants to Haiti. Her dad, John Brown, is Field Operations Director, and her mother, Elizabeth, is Administrative Director. They both are tireless servants of the organization and just great people to be around. I watched that week as Jessica poured her heart and soul into making sure we not only installed the equipment, but also that everything worked flawlessly. She was often up at 5:30 am working to make sure she did not miss a minute when electricity was available to serve the people of this area. To work beside someone whose passion was so strong was truly a blessing.

Next, I want to talk about two young men that I met, whose comments and attitudes had an impact on me. First is a teacher named Ashley. He was interviewed about the students and the school. When asked a question about the students he said, “I love it when a student shows a beating heart for learning.” The next was Johnnie. He is a student there, and some years ago he suffered a terrible foot injury and may have lost that foot had it not been for the medical staff on site at the time. When asked how he felt about Hope for Haiti Foundation he said without even thinking, “I want to use a word that is bigger than thanks, but I cannot find it.” The look in both of these young men’s eyes was so sincere and appreciative as they made these statements that it melted this old man’s heart.

There are other stories, too, like the one of a little girl named Shaunika. She was born some five years ago when we had a medical team there. I have heard her story from several people over the last few years. One of those people is Dr. Kim Sniffen, who is a midwife and five-time trip participant. She was there during the middle of the night when Shaunika was born. She was the first baby we had born when a team was there. There were complications, and had they not been there, it is likely that neither mom nor infant would have survived. I listened as Elade retold the story of her birth and how there was not a dry eye among the team that night. It was all I could do not to start crying myself listening to him. Again, an old man’s heart melted a little more. And my emotions were not only for her, but also pride for the folks like Kim and Elade who have given their service. Just to be associated with them is a blessing.

As I went through my week of inconveniences, the more people I met, the less I noticed the things I was missing. Our afternoon trek down the mountain to the river to bathe by Thursday felt like an afternoon stroll compared to what it was like on Monday. Getting to meet the kids who would often go with us and realizing that they too made that walk several times a day just to bring water to their families kind of put it in perspective. There are so many things we take for granted. Like water. One little boy named Freslee was always around with the biggest smile. One trip, he had me carrying his water for him as he joked and smiled with us. Again, an old man’s heart melted a little more.

I could go on a lot more with more stories about a group of people who take pride in their education. Children, teachers, and health care providers who walk two or more miles each way to schools and clinics because it’s a privilege that they appreciate. Parents who want a better life for their children. People who do not want a handout, but instead an opportunity. Opportunities that we as first world people have an abundance of and take for granted. I went to Haiti to give, and instead, God has blessed my heart and soul with a love for a community of proud and appreciative people. He has put perspective back in an old man’s life. And yes, I am only fifty-three. Not an old man by a lot of standards. But I had a heart that had become a little hardened, a little less patient, a little suspicious, and maybe a little less tolerant. Kinda like an old man’s heart. Now, that heart has received new life. New hope. And a renewed desire to do everything here I can to help not just the Foundation, but more importantly, the people. Thank you, Haiti, for giving me so much more than I gave you. I look forward to my return. 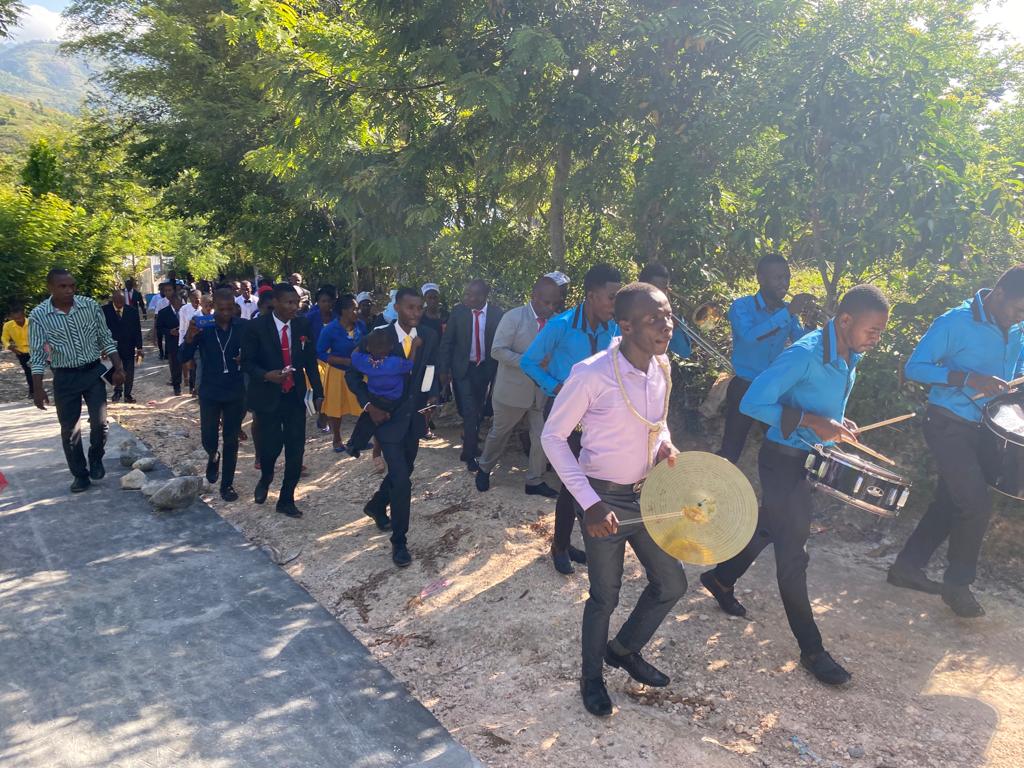