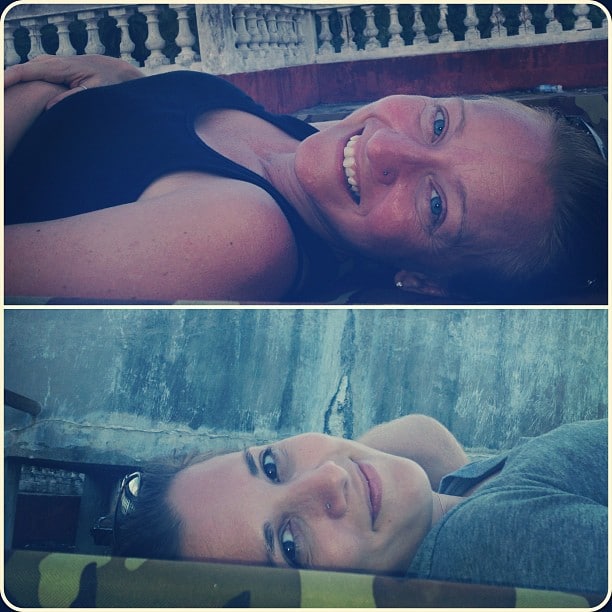 Jessica (top) and Tara, relaxing on the rooftop in Bainet at the end of the week.

Jessica traveled with a team to Haiti from June 9th through the 16th. After she returned home, she spent some time reflecting on her trip. Here is her recap.

I was asked to write another blog about my recent trip to Haiti, and as I stated in my last blog it is not my forté, but I will give it my best shot. Where to begin though? So much happened, so much confusion, so many feelings.

My first trip to Haiti was a few years ago in September, following the earthquake. I went to Haiti to set up several computers in the new computer lab in the school. I traveled with my father and mother, (or daddy and mommy, as I call them), my cousin Tara, Elade the founder of HFHF, and a few other people. Setting up the computer lab was very rewarding and not too time consuming. This allowed me to spend a good amount of time with my family and friends, enjoying the experience and soaking it all in. It was awesome.

This recent trip was very different in many ways. My goal for this trip was to install a wireless system that would fix some current wireless issues and provide Internet access to the new clinic building, as well as perform some other IT tasks. The work I was doing on this trip would be a lot more time consuming and I felt a bit more pressure to succeed. I traveled with my cousin Tara again and three other people that I had met only once before or for the first time.

The trip started much the same as the first, but quickly turned sour, at least from my perspective at the time. I had decided to take this opportunity to quit smoking, so I was very emotional and in a mild depressive state. Stress at work and at home the few months leading up to this trip did not help either.

On the second day, I developed a rash on the lower part of both my legs. It itched and did not allow me to shave, which I was not happy about at all. Then I developed a sore throat, was coughing a lot, and was very congested. A few days in, I developed a different type of rash on my back that started small, then quickly spread across the upper part of my back. The only theory that made sense was that it was poison ivy, to which I have an allergy. It itched and burned beyond belief the entire trip. The 80 to 90 degree heat, even at night, did not help matters.

Sleep was non-existent on this trip. It was impossible to fall asleep. When I did actually fall asleep, I would wake multiple times throughout the night. Then, I was up before 5am most days to get started on work at the school. I needed to start so early to take advantage of the free Internet bandwidth window before 7am, as there is a daily limit of bandwidth imposed by the Internet service provider.

Speaking of the work I was doing, that was a nightmare. Between limited bandwidth, limited power, computer viruses, and a host of other Murphy’s laws, I was stressed. I was so worried I would end up leaving the school in a worse off situation than when I came. My time to get things done was slowly running out. I was working so much that I had little time to spend with my other trip mates and my Haitian friends in the village. And even when I did spend time with them, I was thinking and worrying about what I had left to accomplish. Ultimately though, on the very last day, I was able to accomplish all I had planned.

Physically, throughout the trip, I was beyond exhaustion. Anyone who knows me knows that I am very much an indoor person. I get winded just walking up the stairs in my house for goodness sake. But I felt like I had to keep up with everyone else. The times that our team would travel on foot all over the mountain to the river and to other places of interest were the only time I really had to bond with them. So I pushed myself, so much more than I had ever physically pushed myself before, to the point of honest fear at times that I would drop to the ground and would have to be carried back. To my surprise, that did not happen, and I had no idea how.

Still amidst a few other unfortunate circumstances on the trip, the last couple days I was able to relax. Tara pointed out that I was not myself during the better part of the trip, and it was only those last couple days that I was the person she knew so well. A person that enjoyed the company of others and that loved to laugh and be silly. Even though it seemed I had come around though, I felt a sort of haunting that still lingered over that trip for me.

As the trip was coming to an end and we were flying over Raleigh about to land, I looked out of the window. I saw the lights of the well-developed areas, tall modern buildings, cars driving in perfectly lined lanes. And then I said to myself, thank you God for allowing me to be born in the United States. What I was coming to understand at that very moment was that I needed to step out of my finite way of thinking. I should not be so presumptuous in my envy of what others have been blessed with, that I am to thank God for what He has blessed me with, and that I should be honored to use those blessings to enrich the lives of others in His name.

Now let me point out, this is a much different feeling than when I came back from Haiti the first time. The first time I felt guilt. Guilt for what I had and for what the people of Haiti did not have. That’s not a good feeling. I spoke about this with Elade. He said that people will ask him if it angers him to see some in the US with so much while the people of his country struggle. He responds that it does not anger him at all. He feels the opportunities in the US are unlimited and would not wish them to be unavailable for anyone.

During this time, I also started thinking a bit more about the trip as a whole. It kind of started as a cloud of thinking. What happened? What the heck was all of that about? Why was I pushed so much, emotionally, physically? I mean, it’s like I was being tested. Wait…tested. That’s interesting.

Then I felt clarity begin to take over. Yes, I had been tested. Tested on my passion for this Foundation, for the country of Haiti, for the people of Haiti. Has it all just been superficial all of these years? Am I only in this because most of my family is, my parents, sister, cousins, aunts? Is it just what I do because they do? You see, it’s easy to love Haiti when Haiti is easy to love. But this time around, Haiti wasn’t so nice to me. So, was I still in love? My mind seemed to yell YES! without a moment’s hesitation. Then I smiled to myself, and of course teared up, and I knew that I was still in love, and that I would be back one day.