The Jack of All Trades 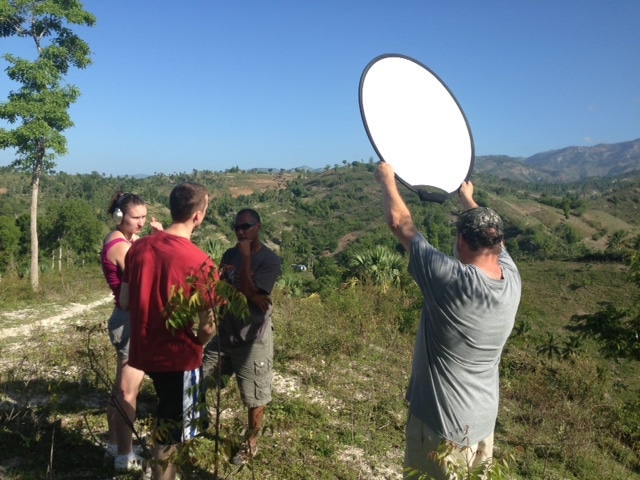 Film team shooting some footage of where the water will need to be pumped from.

We have a group of five fearless travelers in Haiti this week, working on videography and IT projects.  Today’s post comes from Jessica on the IT team:

As I am writing this blog about the day before, I am laying on my cot, listening to the usual morning sounds. Water trickling through a portable filter into another container. A donkey and a goat having a conversation. The village residents walking about and talking outside. It is times like these that it’s so easy to just be still, and really know that He is God.

Yesterday was a busy day for all. Tara, Alisane and Alex continued filming and performing interviews. They were all over the place again! They performed interviews and got footage at the school, clinic, and other places in and around the village.

They traveled to the river to film a couple children gathering water. They also got footage of where the pump station will be constructed to get water up the mountain to the village.

They interviewed a young man who was one of the first seen at the clinic in Zorangé several years ago. He fell out of a tree and injured his foot. It was not healing and he was in danger of losing toes or the entire foot. He was seen by one of our doctors and they were able to treat it properly and it has healed completely.

They also interviewed a 1st grader and his father. The child walks over an hour each way to and from school everyday. He said that he does not aspire to become a soccer star, he would rather be an accountant!

Another interview was with John the intern (as we call him). He is a UNC medical school graduate that is interning at the clinic for 3 weeks. He hopes to intern again in Zorangé for a 6 month stretch. He ultimately would like to become a doctor.

Barry was a jack of all trades again. He worked with the media team for the better part of the day. Then he made runs back and forth from the school, clinic and dorm testing the wireless system.

The IT team had a day of initial defeat, yet ultimate triumph. Testing of the wireless system did not go smoothly due to power limitations
and bandwidth limitations, but got better as the day went on. A library catalog program was installed on the library computer. Training was provided to the IT staff at the school on basic computer maintenance and troubleshooting.

At the end of a very busy day, we were able to truly relax. We came upon a rare treasure of cold Prestige, the best beer in the world (seriously, it has won the World Beer competition twice). After dinner, we sat on the front porch under the stars, enjoyed our Prestige, and listened to stand up comedy on intern John’s iPod. So awesome.