It Would Be So Nice 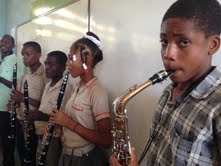 We have a group of five fearless travelers in Haiti this week, working on videography and IT projects.  Today’s post comes from Tara on the marketing team:

Jessica kept talking about how beautiful it sounds when the rain falls in Haiti against the dorm’s tin roof. I mean, really going on and on about it. So what does night #1 in Zorangé bring? An absolute deluge! I guess you get what you pray for!

The rain on the tin roof lulled us all to sleep. Wake up call for half of the team was 5am when we could get power to charge necessary video and IT equipment.

Breakfast was served (thank you sweet baby Jesus for the best coffee on the planet). Barry has been immersed in conversation with Elade discussing the most cost effective way to get a converted Jeep Wrangler to Zorangé. Buy new in PAP? Buy used in the US, convert to mobile medical vehicle, and ship over? Convert existing Jeep that’s already here to a mobile medical vehicle? We need another jeep to use as a mobile clinic. It would be the literal vehicle to provide maternity care to the region, modeled after Midwives for Haiti mobile clinic.

Alex and Alisane are true storytellers. They ask great questions of our interviewees and I can see their genuine smiles when we hear the stories from teachers and students.  Alex already has his Haitian name. He is officially “Brase” now- Big Shot!

We’ve started to record some audio for a song Karl wrote called “It Would Be So Nice.” We had Johnny, one of HFHFs first patients, help with the recording. We know he understands the song since he is already making jokes about it… we were hanging out under a tree in the south corner of the school courtyard. I was asking him when he was coming to America to visit – he said visas are difficult to get, but that “it would be so nice.” Ha, smart guy!

At lunch, Elade reminded us of all of his long-standing motto “Don’t taste the food, eat the food.” So we all chowed down on some soup and bread.

The afternoon is being spent filming the sewing class at the trade school, a nurse’s daily journey to and from work, and a church service.