It takes a village to remove the rubble 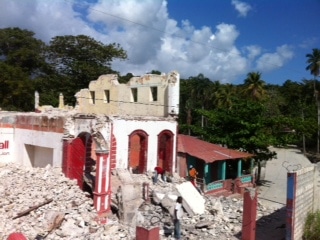 If there is anything you need and don’t see,
please let us know and we will show you how to do without it.
– Haitian saying

Haiti just commemorated the third anniversary of the devastating 2010 earthquake. There is a lot of rubble still to be removed. There are many buildings and houses with red marks from the Ministry of Publics that simply need to be demolished.

Such was the case for one of the buildings HFHF has owned since before the earthquake. The building is in Bainet, a town earmarked as the future headquarters of HFHF Haiti, and the building as our center of operations. This building was a beautiful landmark in the city and unfortunately it sits right on the fault line. It did not stand a chance during the earthquake.

For the last three years, Bainet’s government officials have encouraged us to demolish it. We knew the task of tearing down this beautiful, yet imposing piece of property was not small. We have tried to engage other groups that have worked in the city that possess heavy equipment, but they had not been able to help us.

This year, there is a new city official who has already sent us a letter to take the building down as soon as possible.

…Here comes a team that has no tools, but is eager to help us remove this challenge. The leader of this team, Tene, has worked with us in the past constructing our Zorangé school. Although we have not secured the funds to demolish this building yet, he has offered to come and take a few guys and demolish it. Our founder had the opportunity to chat with Tene and thank him for working with us with no funds and no down payment. Tene told him that if HFHF owes him money, it’s like having it in the bank — he’ll get it. No worries.

“I’m thankful for the relationship we have built in the community and we pray we continue to do so as we work throughout the state,” said Jean Elade Eloi, HFHF’s founder. “It’ll cost us about $5000 to do this work and we hope for help to raise the funds to pay these guys who have sacrificed to do this hard and important work for us.”

Field Operations Director John Brown said some of the men are using pick axes to demolish the building. Even though equipment that could make the work light isn’t available, this community doesn’t slow down. They have united to help remove the building by whatever means possible – talk about teamwork!