John Brown, HFHF’s Operations Director, recently returned from a trip to Haiti, where he was able to partner with Allen Rainey of Sonlight Power to help get HFHF’s solar power system up and running again. In addition to being a rockstar for HFHF, John Brown is also a B-list celebrity in Haiti (sorry, John, but I think Wyclef wins this one ;)). If any white person walks down the streets of Bainet, they will be called John Brown. Not kidding. 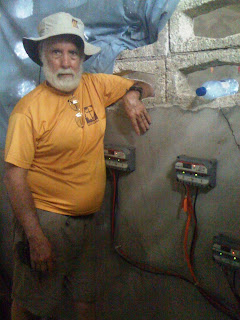 We were on a roll. I took Allen Rainey, Executive Director and Founder of Sonlight Power, to Zorange to help us get our solar electric system up and running again. I connected with Allen by way of the Internet as I was doing some research on solar systems and came across his site, www.sonlightpower.org. To make a long story short, I asked him if he would be interested in going to Haiti with me to help us. He did not hesitate to say “yes.” From the time I met Allen in Miami to catch a flight to Port-au-Prince, until the time we parted in Miami to catch our respective flights home, I was blessed and inspired. His organization’s motto is “Using Solar to share God’s love.” It was quite evident that Allen desires to use the gifts God has blessed him with to share the Good news. 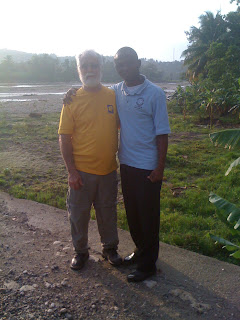 After traveling most of the day, we arrived in Bigot about an hour after dark. We settled in and got some rest. The next day was spent getting our system up and running. We had little Johnny and Jude assisting us. We moved the solar equipment from where it originally was, which was in the same room as the generator, to a small room a short distance away to separate the battery bank and the generator. After the solar array wires and the generator wire were run, the charge controllers and inverter were mounted and wired up. With a few adjustments and modifications to different things, we were making electricity. Allen really knows his stuff. 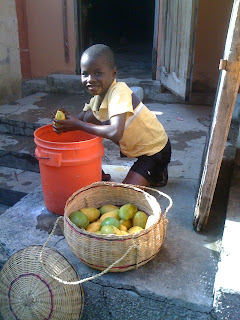 The next day Allen gave a class on maintenance and operations of the solar system to some of the key personnel who would be responsible for its operation. He did a great job with the translation assistance from Nasson and Jude. When that was done we ran some cable for the IT team that will be coming in a few weeks to install some wireless modems and then packed up and headed to Bainet to spend the night.

I never get tired of sleeping to the sound of the waves crashing on the beach there. I was also surprised to find out that we have two mango trees on our property there. I think everyone has been keeping that a secret. Oh well. I took advantage of the discovery and can honestly say I have never had a mango that was sweeter or juicier than the ones we ate there. Olivier was there with us and I think he ate ten of them in one sitting. I have to admit I ate entirely too much the whole trip. I have no willpower when it comes to watching my portions when Vierge is cooking. I can’t wait to go back.