Resilience in the Rubble: One Year Later 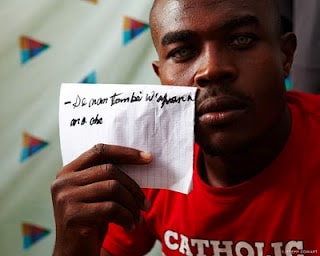 his sign says "You learn how to walk by falling." Photo credit: Jeremy Cowart, Voices of Haiti

I don’t remember where I was at 4:53 on January 12, 2010, but there are 9 million people in a small Caribbean nation who will never forget. As I likely rinsed out my coffee mug and filed away e-mails, preparing to leave work for the afternoon, Haiti was being devastated as a 7.0 earthquake ravaged the nation’s overcrowded capital and the surrounding areas. In just 30 seconds, a nation was changed forever.

I do remember the day that followed the earthquake, as the reports poured in and we began to realize the scope of the event. “More than half of Port au Prince destroyed” the headlines read, pictures of the collapsed presidential palace reminding us that earthquakes don’t discriminate. As the death toll rose, we struggled to comprehend what was happening. It was so much bigger than anything we’d experienced, so widespread that it almost didn’t seem real, so hard to translate to our real lives. What would it look like if half the buildings in Raleigh were suddenly turned into piles of rubble? What would it look like if 300,000 people suddenly died, their bodies being left in the street, pushed into mass graves, while families were simply left wondering? What would happen if 1 million people were suddenly homeless – where would they go? As we worried about our friends in Haiti and were heartbroken by the pain on the faces of strangers plastering CNN, we also struggled to understand why; despite the fact that we’ve experienced enough to accept that the world is broken, we all like to think it has limits, a certain fairness to its blows. We like to think it distributes pain evenly, or has a sense of decency, to know when enough is enough. A disaster like this was unthinkable anywhere; in Haiti, it just seemed unnecessarily cruel.

Haiti already faced so many challenges before the earthquake – extreme poverty, poor sanitation and public health, lack of infrastructure, lack of access to education. How could what little they had be totally destroyed? Not only did our hearts break for the severe pain of the tragedy itself – imagine losing your home, your city, your family, everything you know and love – but we began to realize that this would have enormous long-term structural and economic effects on a nation already struggling to keep stride with the rest of the world.

And one year later, Haiti still struggles to recover. While some progress has been made, sadly some places look very much the same, despite the amount of aid that poured in following the event. One million people still remain homeless, especially in the capital of Port au Prince, where sprawling tent cities fill city parks and even the medians of highways. Conditions continue to worsen as sanitation becomes more difficult, gang and sexual violence increases and a rare cholera outbreak threatens the public health of these overcrowded areas. Haiti very much still needs our help.

Thankfully, at Hope for Haiti Foundation, we’ve seen great progress in the areas where we work. We’ve been able to help more than 3,000 families get back on their feet, rebuilding more than 400 homes and providing cement to repair 22 schools and three churches. Construction teams continue to work daily to fully repair our school, and we’ve been able to operate the clinic and hold classes in the portion that remained standing, finishing the school year on time and even building a computer lab! We’re so thankful for our supporters who came together to make this possible, and we’re thankful that we were able to get on the ground quickly and make a tangible difference, especially as we saw so many organizations that faced red tape or serious logistical difficulties. We now must focus on continuing with our mission, projects and goals and not let the devastating event distract us from the vision we have for Zorange and the surrounding communities.

But, one year later, as we remember the Haitian earthquake, more than focusing on what HFHF has accomplished, we want to honor the strength and resilience of the Haitian people. Not only do they live with strength through often unspeakable conditions in their daily lives, they also have not lost their joy, love or determination, despite having their homes, lives and families completely torn apart in just an instant. We are daily impressed by our friends there who carry on, who work in the hot sun to repair their lives and who grit their teeth and move forward – pursuing an education, investing in their communities, finding ways improve to conditions for themselves and their children. Not only do they refuse to give up through daily challenges and after countless natural disasters, but they dare to dream for something better. While they have every right to be punch drunk, they keep getting back up – with a smile on their face, love for each other and extreme generosity for outsiders. It’s this spirit that convinces us that Haiti is not a hopeless nation and that keeps us doing what we’re doing. The resilience we see in the eyes of the Haitian people and their desire for a better life tells us that, if given the right tools, they will change their nation for the better. That’s why we continue to strive to empower and equip our friends there with education, medical care and spiritual and community developments, so they have the opportunity to make a better future for themselves and for Haiti. Where the world might see poverty, social issues, corrupt government and now piles of rubble, we see potential.

There is no doubt that the earthquake has changed Haiti forever. That level of widespread devastation takes time to recover from and the psychological effects remain, as some people still fear future earthquakes or more buildings collapsing. 4:53 p.m. one year ago today will always be a defining moment in Haiti’s history – but we have hope that it will eventually come to define the nation’s turning point and strength, not its pain and tragedy. We hope to look back on January 12, and without forgetting those whose lives were lost, remember it as the day that the world started paying attention to Haiti and that the nation was finally given the resources it needs to develop. We pray that as Haiti rebuilds, it rebuilds stronger than before.

Please join us in remembering the victims of the earthquake, celebrating the strength and hope in Haiti and dreaming about what Haiti can be someday. If you’re in the Raleigh area, you can join us on Sunday, January 16 at the Oxford Gastropub as we host an event in honor of the one year anniversary of the earthquake. The event, which will be held from 4 p.m. to 8 p.m. will feature live music and a silent auction, and all proceeds, including 10 percent of the Oxford’s food sales, will go directly to HFHF. We hope you can make it!